What We Have to Offer... 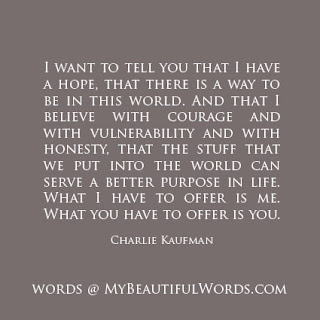 I want to tell you that I have a hope, that there is a way to be in this world. And that I believe with courage and with vulnerability and with honesty, that the stuff that we put into the world can serve a better purpose in life. What I have to offer is me. What you have to offer is you."

Excerpts and continuations of this moving speech...

"So you are here and I am here, spending our time as we must.

It is an ancient pattern of time usage for me.

And I am trying to move deeper, hoping to be helpful.

It is your secret. Even from yourself.

But, it is the thing that wants to live.

It is the thing from which your art, your painting, your dance, your composition, your philosophical treatise, your screenplay is born.

People all over the world spend countless hours of their lives every week being fed entertainment in the forms of movies, TV shows, newspapers, YouTube videos, the Internet. And it’s ludicrous to believe that this stuff doesn’t alter our brains. And it’s also equally ludicrous to believe that at the very least this mass distraction and manipulation is not convenient for the people who are in charge.

The world is very scary now. It always has been. But something very grotesque and specific to our time is blanketing us. We need to see that it is not reality. It is a choice we are making or allowing other people to make for us.

Don’t allow yourself to be tricked into thinking that the way things are is the way the world must work.

What I’d like to express is the notion that by being honest, thoughtful and aware of the existence of other living beings, a change can begin to happen in how we think of ourselves and the world and ourselves in the world.

We are not the passive audience for this big, messed up power play. We don’t have to be. We can say who we are. We can assert our right to existence. We can say to the bullies and con men, the people who try to shame us, embarrass us, flatter us, to the people who have no compunction about lying to us to get our money, to get our allegiance, that we are thinking, really thinking about who we are. And we will express ourselves.

And with this, other people won’t feel so alone.

I want to tell you that I have a hope. I believe that there is another way to be in this world. And with courage and vulnerability and honesty, that the stuff we put into the world can serve a better purpose.

What I have to offer is me.

What you have to offer is you."

Postcards. Greeting Cards. Posters. To encourage you. Inspire you. I like to think of these products as little LOVE LETTERS for you, for your friends and for the world.

angela
a sagittarius. and a dreamer. but a believer. and a doer. it's the simple things that make me smile most. summer days. winter days. a walk along the shore. wishing and dreaming myself to these shores. a cup of coffee with a friend. a quiet walk thru hills and valleys. a glass of wine in the evening. a beautiful song on the radio. a quote that makes me reflect. say yes. words. and actions. i believe we should love life. passionately. out loud. and in colour. dare. to be bold. cause magic. share secrets. originally from canada. now living in europe. germany to be exact. in a place one calls the black forest. that's all for now. little bits and pieces of me.